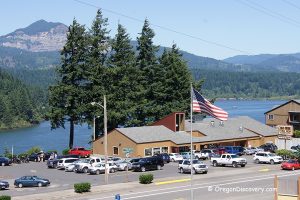 Cascade Locks is located 40 miles east of Portland, in the middle of the Columbia Gorge National Scenic Area. Despite the name, there are no operational locks in the town today.

Until 1896, the segment of the Columbia River near today’s Cascade Locks was unsuitable for navigation due to the Cascades Rapids stretching for over two miles. Described as the “great rapids of the Cascades” by Lewis and Clark, the rapids were also known as the “great cascades”. That is exactly how the Cascade Mountain Range got its name.

Most attempts to navigate through the Cascades Rapids bore disastrous results; travelers had to stop here for the land detour. The nature of the logistics eventually gave rise to a small settlement in the 1850s that grew to become the Cascade Locks of today. In 1896, contraction of the Cascade Locks and Canal was completed, allowing safe passage through the rapids.

With the commencement of the Bonneville Dam construction down the river in 1934, the city experienced an influx of workers that in the end necessitated a formal incorporation of the city on June 19, 1935, making Cascade Locks one of the oldest towns on the Columbia River.

After the Bonneville Dam was completed in 1938, Lake Bonneville, the Dam’s reservoir, expanded behind it and submerged the Cascade Locks and Canal leaving only their upper part visible.

The city lost its use as a transportation center, but retained the status of a timber and fishing hub, and continued prospering.

The city thrived throughout most of the twentieth century. Major changes happened in 1986 when the Columbia River Gorge National Scenic Area Act was passed, and all major construction in the area was completed. By the end of the 1980’s, lumber mills were closed, while the National Forests were shut down to logging. Timber industry gave way to tourism, which remains on the rise nowadays.

Today, Cascade Locks is considered one of the best sailing places, owing to the proximity of Lake Bonneville and unique wind patterns above it. There are also windsurfing, hiking, biking, fishing, and many other recreational activities available just 30 minutes away from Portland.

Marine Park stretching along the Columbia River where the Cascade Locks and Canal used to be is listed in the National Register of Historic Places. The park has picnic areas, playgrounds, and the Cascade Locks Historical Museum.

The Bridge of the Gods

One cannot talk about Cascade Locks without mentioning the Bridge of the Gods, a magnificent steel construction located downstream. This is a 1,856-foot (565 m) toll bridge across the Columbia River opened in 1926. It connects Oregon’s I-84 and Washington’s SR-14, with the annual traffic estimated around 1.6 million vehicles.

The “predecessor” and the namesake of the Bridge of the Gods has a direct connection to the Cascades Rapids, whose existence led to the establishment of the city. This first Bridge of the Gods was created by an enormous landslide, which according to some of the recent findings happened between 1500 and 1760. The landslide fully blocked the Columbia River and created an inland sea in eastern Oregon, Washington, and Idaho. Native Americans used to cross the river using this natural dam until it collapsed, leaving the Cascades Rapids as a reminder of its existence.