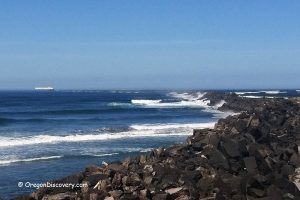 Located 10 miles west of Astoria, Fort Stevens was built in 1864 and remained an active military reservation until 1947. Fort Stevens guarded the mouth of the Columbia River during the period from the Civil War-era until the end of World War II. The name was given after former governor of Washington Territory General Isaac Stevens, who was killed in Virginia in 1862.

On Sunday, June 21, 1942, at 11.30 p.m., a Japanese Navy submarine I-25 bypassed the United States coastal waters and attacked Battery Russell. Approximately seventeen shells were fired at the Battery Russell direction. Fortunately, there were no serious consequences, just the minimal property damage. It's still unclear why soldiers received the order not to fire back.

Fort Stevens was only one a continental U.S. military base to be attacked by a foreign army since the War of 1812.

After World War II, the fort was deactivated, the guns removed, some buildings were demolished, but almost all batteries are available for exploration today.

Opened to the public in 1955, the 4,300-acre Fort Stevens State Park offers an exploration of history and wildlife. The park is known for its recreational opportunities as well.

Take a walking tour and explore the primary military defense installation with massive concrete gun batteries and other old structures. In the Visitor center, You will see Harbor Defense System at the mouth of the Columbia River, old photos, weapons, and scale model of the Battery Russell 10'' gun. Guided tours are available during the summer months.

The skeleton of the over 100 years old shipwreck of Peter Iredale is a popular attraction within the Fort Stevens State Park. Peter Iredale ran ashore on Clatsop Spit, south of the Columbia River channel on October 25, 1906. The wreckage is considered one of the most accessible and long-lasting in the world.

There are over six miles of hiking and nine miles of biking trails.

Delaura Dune Trail - the 4 miles hiking trail along the coast.

Kestrel Dune Trail - the 1.3-mile biking trail along the coast to the Peter Iredale Shipwreck.

A 56-acre Coffenbury Lake is a 56-acre typical coastal lake, containing water of rain falls and snow that was trapped between sandy dunes decades ago. There are no inflowing or outflowing streams. Fluctuation of level depends on seasonal changes in the water table.

Situated at the mouth of the Columbia River, the freshwater lake is narrow but about a mile long. The lake was named after George Washington Coffenberry (Coffenbury), the first pioneer settler from West Virginia who became a four-term county judge for Clatsop County just before the Oregon Territorial Court in 1849 was established.

Coffenbury Lake features with its unique location in the coastal dense forest and filled with a variety of wildlife. Around the lake, you will be able to find the squirrel, marten, otter, mink, skunk, beaver, and a wide diversity of birds. You might be lucky to see elk or deer coming from the forest to drink water.

Coffenbury Lake it a great destination for swimming, boating, canoeing, and paddling. Motorized boats with a 10 mph speed limit are permitted (gas-powered boats are not allowed). There are fishing docks, boat ramps, a sandy beach, and picnic sites.

The 9.7-mile rocky Jetties - South Jetty on the Oregon side and North Jetty on the Washington side were built between 1885 and 1895 to keep the mouth of the Columbia River from moving and to prevent clogging the river mouth by beach sand.

Point Adams is the southern edge of the mouth of the Columbia River. A large sand Clatsop Spit extends from the Point Adams to the northern edge of South Jetty. Drive from the Fort Stevens Park entrance 3.9 miles to a parking area C at the jetty near Jetty Observation Tower. The 20-foot viewing platform provides an impressive view of the ocean, waves in action and busy navigation traffic along the South Jetty.

Besides hiking, fishing, and various water activities, the state park offers other exciting opportunities. Learn about the military historic site, get close to the corroded skeleton of the Peter Ireland Shipwreck, drive to the South Jetty parking area C to view the ocean and busy navigation traffic at the mouth of the Columbia River.

Day-use fees: Yes or Parking Permit for State Parks
Dogs: Must be on a leash
Usage: Moderate to heavy
Accommodations: Campground sites, yurts, and cabins

From the junction of Highway 101 and Highway 30 in Astoria,